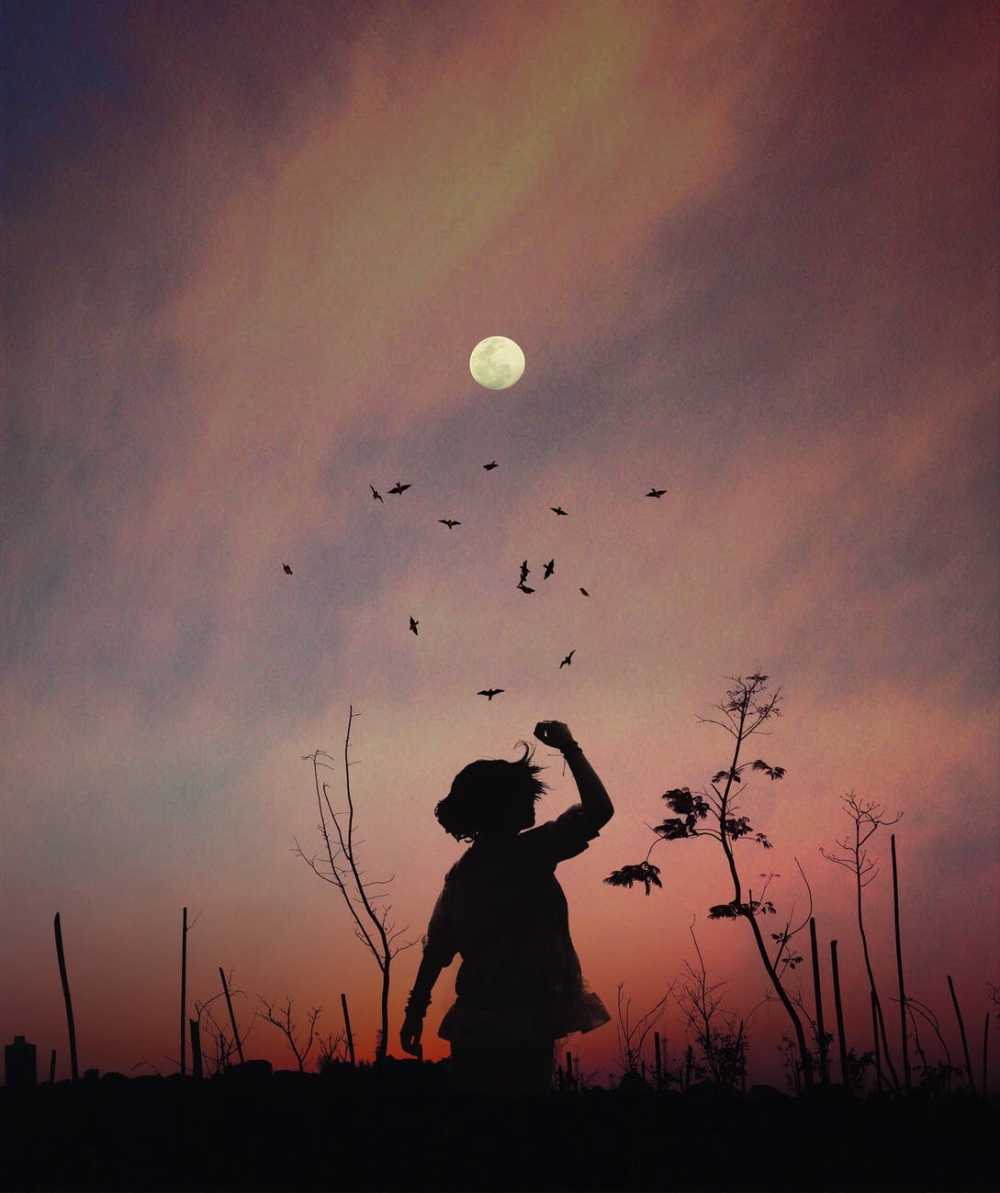 It was a crisp fall day with a grey overcast in the sky. Penny was outside in the front yard laying down on the cool dry grass. This is a strict childlike affliction. The neighbor girl Hiede just walked across the field of torn down corn stalks to get to Penny’s home. Hiede was a year younger than Penny. The two have been friends for years, always playing together when one of them had a free moment. Upon seeing Penny from a distance she yelled. “Hi, Penny whatcha up to?” With a slight giggle Hiede said, “Your not going to get a sun tan that way.”

Penny had on a light pair of black knit pants and a rainbow striped long sleeve shirt. “I know Hiede, I am not trying to get a tan.” Looking at Penny with complete curiosity, she asked her 7 year old friend what she was in fact doing than. “I am calling the birds”. Penny exclaimed. You may think it is complex but as a 7 year old she has been in this still position thousands of times already. Penny was not making a noise. She just laid there with her eyes shut, calm posture like she was meditating and arms along her side. She was waiting for the birds.

There were no birds in the sky that Hiede could see. “Well, I think you have to make a bird call, to get birds to come to you. I have this bird whistle that I can bring over next time. My uncle also has this duck call that he uses when hunting.”

“Yeah, I have a green one, when I add water to it, it sounds like a real bird song.” Penny’s eyes got wide, “but there is another way to silently call birds. Sometimes, if I lay here still enough the birds come no matter what affliction is happening above me.” Try it with me. ” Hiede still not convinced and having a hint of belief that her friend may indeed be crazy, asks, “Why is it better to call birds that way, with your mind? When we know a whistle works.” Penny slightly frustrated with her friends lack of trust, “Hiede, I do not know why, Just try it.” Hiede lays down gets comfortable and realizes she does not know how to try. Penny explains that they always come when she lays down and prays to God about the pain in her heart. Honest to God. Cause in this childlike story it is about God being there. It is her way of believing that God hears her prayers in times of trouble, when outside. Like when the birds come and circle her from above it means they see her. If the birds see her than surely God sees her. It is a heart and head thing, ONLY. Innocent as it may be.

Hiede did believe in God but she did not go to church. Something to do with her Grandfather being an alter boy and having to ring the church bells has gotten her family to no longer attend church. The rule is you can’t call any one person out, but if it’s already public knowledge, I see no harm. It would be an old story about a convicted Priest in Brown village. He only liked boys because he didn’t like Penny. Pinky swear. Sharing this brother (and sister) because a broken family at the bus stop needs to know if your going to evangelize your neighbor. There is a difference in asking for spiritual clarification and true conviction. Things are not always what they seem in BakersField.

Anyhow, Hiede would always listen to Penny’s crazy ideas. It was always a fun adventure when the two got together. So there Penny and Hiede were laying on the ground trying to call the birds. They never did come to visit that day.

Penny logically decided that it must only be certain times when the birds come. Like somehow the same power that made birds fly south in the winter migration was the same thing that was in her heart at times. Like prayers have a different frequency depending on the emotion of the prayer. She knew it sounded a bit off. Even more so when she heard herself explaining her thoughts to Hiede. Yet, she hung onto the belief. After all St. Francis of Assisi was a holy man and must have believed something similar because birds were often above his head. They were there for a reason.

🎵Make new friends but keep the old. Some are silver and the others gold. A circle’s round that never ends. That’s how long I want to be your friend. 🎶

Now back to Penny and Hiede Adventures. Penny explained to Hiede that her teacher at school explained that God is everywhere. Penny thought she would question the word everywhere and trip up the teacher. Surely, if God was everywhere he would control everything since he was all powerful and than nothing bad would ever happen. Plus God would be in charge of all the magic in the world. Not that magic is real because there was always an explanation. So, Penny asked the teacher if God was in her jewelry box. Without any hesitation the teacher said that God was indeed in her jewelry box and he was even in her heart.

Penny has a light blue jewelry box that when you opened it a beautiful ballerina with a pink Tu-tu dances in circles. The teacher said that God was even in her small jewelry box. Yet, Penny didn’t believe her. Some called it magic that the ballerina would dance but it was a button that was released that caused the girl to dance. Just like the button on a refrigerator door that turned the light on.

Anyhow, Penny rationalized that if God is everywhere and made everything living, surely, HE could have birds come to comfort Penny when she was in distress. Like her emotional pain was the magic button to reassure her that she is loved. HE could not stop people from the decisions they made but he could have HIS creatures follow an imaginary beacon from her heart. This somehow reassured her of knowing she was not alone. Whenever, it was most needed it especially worked. The birds showed up to prove that. Every time. Everywhere. Outside. Whenever there was suffering. The change in her heart could change the atmosphere. It was not magic. It was a natural law that some seemed to not know of. Birds travel by something not seen by us humans but there is a definite sense that the birds use something that is everywhere to help them navigate to specific locations.

You know when you first watch a magic trick and you are in awe of the surprise. Well, the trick is ruined once you really know how it is done. The trick still works every time. You just realize it is not as awe inspiring as it first was. It is just natural law. A simple button to be pushed and released. Not a party trick. Not a tug of war. Not a get in the “right” position to telepathically open a fridge door. Not a sales tactic. Not a competition. Not a highlight reel. Only children of simple minds open and close the refrigerator door and are wrongly ordered in thinking they are all powerful by the light coming on. It is a loving, praise worthy self sacrifice given to the trinity to not open and close your phone. Did the light come on?

Thanks be to God that we are not objects. We are made in the image and likeness of God. God is the creator of heaven and earth. HE made natural law. He is the giver of gravity, barometric pressure, electrometric fields, mirrored neurons, emotional cognation, chemical sensitivity, and whatever else we come to believe in, within natural scientific law that can not be directly seen. HE is the source of the science no matter how it is used. We can manipulate natural scientific law but we must do it with care and respect for all. Right or Right?